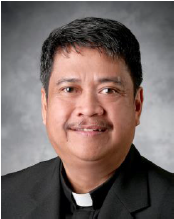 Associate Pastor at All Saints since August 1, 2018

Father Albert Sayson was born in 1962 in Naga City, Philippines. He studied in a Catholic school run by Chinese priests. This school provided students a venue to grow in faith and to be involved in church work as altar servers or members of the school choir. He served as an altar boy right through his high school years and continued to work as a convent boy during his first year of university. After almost a year, he was encouraged by Fr. Joseph Chen to attend a vocation campaign search. Out of curiosity he participated in the gathering and following that began to pray for guidance to take the entrance examination to enter in the seminary. He was ordained to the priesthood on May 8, 1993 in Taytay, Rizal, Philippines. His first assignment in the Diocese of Calgary was as the associate pastor of Holy Family, Medicine Hat, in December 2014 until his move to All Saints Parish.
In an interview celebrating his 25 years as priest he said “I am so grateful to all the people who have been supportive and prayed for me. It is in the Mass that I encounter Jesus who has guided me and who I have been celebrating Mass for 25 years for. I am still encountering Jesus with all the people who attend as I celebrate the Eucharist. It was at the Chrism Mass that I renewed my promise to serve God’s people and his church as I celebrate my 25th anniversary of my ordination to the priesthood. I am so grateful to celebrate my anniversary with other jubilarians in the diocese of Calgary.”