Update - Bats in my Backyard 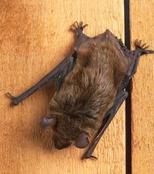 The last week in July my sister and her family were here for a visit and we spent a lot of time in the yard enjoying the great weather. Late one morning we noticed a bat darting around, repeatedly trying to dip down and get a drink of water before pausing to rest on the fence. This seemed like very odd behavior for a bat in the daytime.  Eventually the little guy got too close and landed in a pool of water.  We quickly scooped him out so he wouldn’t drown.  We placed him in an empty bird bath fountain in the shade, and added a tiny bit of water. He immediately started to drink.

It was turning out to be a very hot day, well into the thirties, so we checked back every now and then to see how he was doing. We knew that bats usually come out at night, and began to wonder what had happened to make it fly around in the heat of the day.  As we discussed the situation we all remembered the chainsaws we had heard earlier.  We assumed it was a city crew, or maybe the public school board, that had cut down a tree in the school yard near our house. Or do bats even live in deciduous trees?

All day, off and on, we checked in our bat friend. Our hopes grew a bit when the little guy changed his position, from a tiny scrunched-up ball in the side of the bowl of the fountain to hanging upside down off its edge. A while later it was hanging off the other side. Could this be good news?

As day turned to dusk, there was no real movement from the bat. Dusk turned to dark: still no attempt to leave. Things weren’t looking good.

The next morning Drake, my brother-in-law, was the brave one and went to check.  Bad news: the little bat was dead.  Worse news, a second bat was also there, and he too was dead.  We were all sad and upset about the tree cutting.  Maybe that had nothing to do with the bats being out during the day, but it was a coincidence that wasn’t going by unnoticed.

The last couple of weeks we have seen a single bat flying through the yard.  I’m glad one bat survived, no matter what happened.  My biggest hope for next year is that we have (at least) two bats that come back to our neighbourhood.  If only one comes back it will seem so lonely.  If none come back, I hope it is because it has found another bat or group of bats to be with.  Two years ago I talked about building a bat house. This winter I resolve to make it a priority -- just in case any bats return to our yard.