Coming Home: A Story of Change 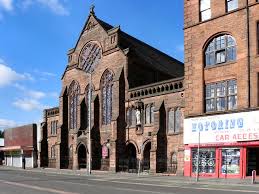 That I found myself on the wrong side of town sitting in a Roman Catholic church at 7 p.m.  on a Wednesday evening attending May Devotions with 498 women of the CWL is one of God’s mysteries, and part of another story.  This current story, which I tell now as an observer, takes place in Glasgow’s St. Alphonsus Church on May 30, 1973.  The other mystery in all of this is that the story only begins after the service has finished.

The crowd has remained seated with fixed attention.  No one has moved.  Unable to break ranks, I’m compelled to remain.  The coughing and whispering has miraculously ended, the silence deafening.  There is a heightened sense of anticipation.  Later, I would come to think of the events of that evening as “stage-managed” in its perfect timing, dramatic effects and in my ability afterwards to recall every nuance of the experience.  Perhaps too, a son returned to the church – an answered prayer for my very Catholic mother.

A Father Chambers is kneeling at the altar, praying before the Blessed Sacrament.  He rises, turns, descends the steps, and comes down into the centre aisle.  He breaks the silence with the crescendo of his opening salvo, in his abrasive Northern Ireland accent.

“You can’t kill the word of God,” he says, and launches into his theme.

This isn’t any fire and brimstone delivery.  He isn’t lecturing or hectoring, or for that matter preaching.  The effect of his delivery is undeniable.  It does violence to the listener.  Enervating and exciting, it captures you, grabs you, holds you, and kicks you in the gut.  I find myself riveted to the seat, able only to turn my head.  There are times when he is speaking when it seems I can’t breathe, can’t talk.  The only thought I seem capable of comprehending is that I am intended to be there, if only to hear this.

He doesn’t deviate from his theme, but continues on in a soft conversational tone with no evidence of his former dialect or any respite from the message.  He continues on down and up the aisle, looking there and here as if speaking to all and to each personally.  He stops infrequently, permitting the congregation to exhale.

“You can burn down churches.  Say that God is dead.  Can`t kill the word of God.”

As if seeking a familiar face, he turns to the alternate side of the congregation to proclaim this freshly discovered, ancient, and venerable truth, newly revealed to its hearers.  He is speaking, but I can’t hear him.  It seems I am unable to speak.  I can only think…

He stops.  The silence takes over again.  He turns, kneels before the Blessed Sacrament, and returns to the sacristy.  The congregation exhales audibly and exits quickly in silence.  The lady on my left whispers pleadingly to me, “What does he mean?”