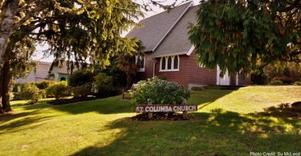 Whenever we travel, church continues to be a part of our lives, although it’s sometimes not quite as convenient as having a place to go nearby at home to get our weekly reminder about practising the faith.

One of the first things Marlene does when we are away on a weekend is look for the nearest Catholic Church so we can attend mass. Part of it, I’m sure, is that she fully embraces the importance of the the Holy Day of Obligation. According to Canon Law, “Sunday, on which by apostolic tradition the paschal mystery is celebrated, must be observed in the universal Church as the primordial holy day of obligation.” So, we find a way to fulfil the obligation.

For me, it’s as much my need for the message I hear Sundays that helps keep me focussed, hopefully, on living the rest of the week as I should. So, we find ourselves when we’re away including Sunday church as an integral part of our trip. And, it’s always interesting to see the differences, and similarities, in how others celebrate their faith.

Our most recent trip took us to the west coast of Vancouver Island. Along the way, the first Sunday found us at St. Elizabeth Church in Sidney, B.C. A couple of things stood out, other than the beautiful harmonies emanating from the choir. Before mass started, a parishioner encouraged visitors to identify themselves and where they were from. Shortly after, Fr. Rolf Hasenack mentioned a meeting between Justin Trudeau, Bono and Bill Gates (catching me up on a bit of news I’m inclined to ignore during a vacation) for Canada to contribute more in foreign aid, to help the poor of the world, an obviously consistent message about our obligation to help those less fortunate. A social gathering, including cookies and coffee, followed.

The following week offered a couple of more difficult choices – Tofino on a Saturday which didn’t quite fit, early Sunday at Ucluelet 30 km away, or what we thought was a 10:30 mass at St. Columba church in Tofino. The 100-year-old church was reminiscent of an old, wooden ship. But, no greetings at the door, small gathering, and unfamiliar hymn books. Turns out, what we thought was a Catholic Church was a combination Anglican and United. This weekend, they were following a United Church format.  We stayed and found similarities in the message, of bringing hope to the world and living life as Jesus did. The celebration was casual and lacked the eucharist. A mingle, cookies and coffee, came after the service.

I do appreciate the consistency and familiarity of the celebration at Catholic churches, where ever they are.

Our third Sunday away was at Elkford. A couple of the grandchildren and their mom attended with us at St. Bernard’s Church.  Fr. David John played peek-a-boo with the boys before mass, then slid off his flip-flops to celebrate mass in his bare feet, with two deer grazing, visible through windows behind the altar, throughout the service. At the end of mass, he asked, “What comes next?” to which the youngest grandson, who had turned five that day, replied, “Peace.” The priest thought Swayer had said, “Feast,” and agreed, inviting everyone to the pot luck that followed.

Sunday of Thanksgiving weekend, we were back at Assumption Church, with familiar faces and Fr. Kevin  reminding us what we should be doing, and actually doing it.  And revelling in a Roughrider victory. A breakfast in the hall followed.

It’s always good to be back home.
Site Proudly powered by the Holy Spirit