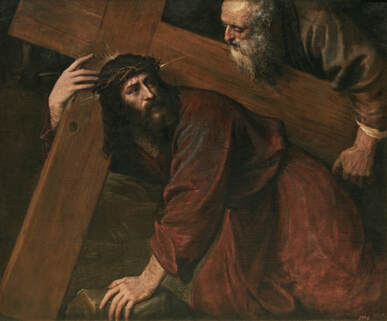 Thirty-five years ago, at the time of this story, I was a recent immigrant without work due to a downturned economy. I hoped, rather than anticipated, that the market would rebound. Despite my faithful attendance at church at the time, I was not a religious, nor a prayerful man. I gave little credence to religion and only lip service to the church community. If I had faith, it was in work and in me. I say this lest the reader be misled. “Fifth Station” is not the product of a religious, zealot-type mind. I believe fact-based, faith-driven stories of this type are commonplace and proliferate the church and are deserving of discernment. This is one of those stories.

In the tenth month of my unemployment in mid-1984, for reasons which appear less obscure to me now, I found myself in the front pew of a local church involved in a distinctly disturbing, but entirely appropriate, dialogue. I engaged Him (Jesus Christ) on the subject of my unemployment.

“This the way you treat your children?”
He replied, “Haven’t I always looked after you?”
“Yes, but I need to work now, not in the sweet by and by!”
He said, “Of course, but in my time.” - End of conversation. I left the building outraged and slammed the door.

In the eleventh month, I again found myself a visitor at a local church, no longer the brash, self-reliant character of before. I was ready to believe that God speaks to people in different ways. I sat in that church for hours, waiting for a similar dialogue to begin. There was no other silence like it - no traffic or bustle, no people noises. No one came or went. I had only the assurance and comfort of the old church, the odour of altar flowers, and the general coolness.

Time had stopped. I was tempted to sleep. I walked the length of the aisle. It was the Fifth station on the western wall that caught my attention. It appeared to me that the plaster caste was no longer an inanimate object. It was clear the characters were alive and that I was being directed into the frame towards the rear of the crowd. Despite being a stranger, an outsider, a Gentile, I was now a witness to this public execution. My former serenity was lost. The noise was deafening, with people shouting profanities over each other.

The heat was intense, airless. There was the heavy odour of body sweat. In the middle of this was a crossbar with someone pinned beneath it, surrounded in a lake of blood. The scene was grotesque - more, macabre. “He must be dead!” I thought. As in all mobs, the legalists were there to explain the law and the reason for this and the correct approach to these matters. The older men said dolefully that He should have been stoned. The younger men, with contempt, addressed Him with profanity and spittle. Someone’s mother was there saying that this was someone’s Son.

I now found myself in the front of the crowd. What/Who was on the ground looked at me. He said something which went over my head, something about “mankind’s sins.” And I knew definitively what this was all for - the expectation of the crowd, that I lift the crossbar from the back of the fallen Christ. It was demanded of me that I should support This Man on the last leg of His journey. I couldn’t say yes. I didn’t have the moral fibre. I knew the cost. I said no only because I couldn’t say yes. It was at that moment I felt myself exiting the action within the frame. I immediately found myself in the church on the seat before the Fifth station, overwhelmed by the recognition of my hubris, my weakness, sinfulness, cowardice, foolishness.

I asked for a second chance to help lift the cross from the fallen Christ and for work He would give me. A man entered the Church from the east side door, on cue, as if all of this had been choreographed. Since I didn’t know anyone in the parish, I assumed him to be the janitor. I apologized for my being there and proceeded to leave. He laughed, saying he was looking for the priest. I explained that he was gone and might be back later. I asked if there was anything I could do. He said no for he was looking for five dollars. I put my hand in my pocket. He continued to refuse. I asked him what he did before being unemployed. He said he was a Carpenter. I asked his address and promised that I or someone else would come. It was then that the first piece of the machinery was put into action in what would later become church-based social outreach with home visits, food assistance, and support to those in need, and…. it’s worth recounting.

Around this time, the Catholic Bishops of Canada produced a document on the work crisis called “Ethical Reflections” and the Bishop of Calgary sent two letters to his Diocese asking what the parishes were doing. Thereafter, the Parish Council and Father Lacroix responded by employing me to do something. Almost simultaneously, others experienced this same Calling, coming from all points of religious and political persuasion. I think we saw points of unity with each other in this work. Since then that work has produced much fruit; changed in location, and developed a wider mandate.

The work in those early days wasn’t always plain sailing. We had our share of skeptics, of pot holes in the road, of dead ends and U-turns. Equally there was a sense of adventure, lots of fun, joy, sadness, unexplainable stories of remarkable coincidence, of God’s timing and providence.
​
If I were to describe the work of seeing Christ in the poor, I would refer to Father Lacroix who thought of it as spirituality in action, which in my case lasted for about three years. At no time in that three years did I doubt I was given a Calling to do this work, begun in that pew in St. Patrick’s Church. It took me weeks after the experience of the “Fifth Station” to see the connection with the fallen Christ and those in need.
Site Proudly powered by the Holy Spirit