Jesus Christ Superstar - Then and Now

by Maria Zappone
Earlier this year, I heard through the theatrical grapevine that Fran Rude was thinking of reviving the production of Jesus Christ Superstar with as many of the old cast from 30 years ago  as possible. At first, I didn't want to chance ruining such a wonderful experience; you can't go back!  Later, I didn't want NOT to be part of the new production so, after my audition, I prepared to embark on a new eight-week journey beginning in the middle of August.  Like any trip, warm memories are created by the people you get to know. When some of those people are members of your own parish, it's a double win!  I'm grateful for the opportunity to get to know fellow All Saints Parish members Stacey Airey and James Manzara- ok, Frank Zappone was also in the play, but I've known my brother for his entire life! ​

When people ask what was my favorite part of the show, I always need to ask them to clarify.  Did they mean "favorite scene" or "favorite song"? The answers are different for each question.  Even after 30 years, however, my favorite scene and song remained the same.

Shockingly, my favorite scene has always been the mob scene!  Before this is recognized as  blasphemous, let me explain....I would like to believe that I would have been a true supporter of  our Lord when he walked the earth...I hope!  Therefore, to prepare for the mod scene, I had to dig deep to find anger and hatred for the man.  Just like a car enthusiast spending all his spare time in the garage restoring an antique, the car soon becomes his pride and joy!  When an actor puts in a great deal of effort in a scene, that becomes the most rewarding scene. Consequently, I felt good about my performance while harassing and taunting Jesus because I hope and pray that it would NOT have been me. Also, as I learned from my high school drama teacher, Peter Mueller, acting is reacting!  The looks I received from Jesus (played by George Gallant) further helped create this nasty mob member!  More impressively about Gallant's performance is that many of his glances at me occurred while he had his back to the audience.  His glances were for my benefit only! Talk about Catholic guilt!

My favorite song was "Could We Start Again Please?".  Thirty years ago, I recognized this as a beautiful, soft, sweet harmonic melody sung while Christ was being dragged and beaten along the backdrop.  Quite a juxtaposition!  This year, as it was The Year of Mercy, I found the words more meaningful, as if it were a reminder to ask for a re-do and our infinitely compassionate  God always saying "yes" to our requests, no matter what brutal happenings are taking place around us.  Also, with the news about the Syrian families settling in Lethbridge, I found myself wondering about how they feel about 'starting again'.  Can we imagine being uprooted, saying good-bye to people we know, and arriving in a country where we don't understand one word spoken all around?  Can we imagine the struggles they go through just to embrace a chance to start again?

After 30 years, some cast members found their old costumes had to be taken out, some had thinning hair where there once used to be a thick, full coiffure, and talk in the ladies' dressing room included all sorts of remedies for hot flashes! Some cast members seemed younger and very energetic....that will change in 30 years!  What was a surprise was learning that some of the younger thespians had never heard the Jesus Christ Superstar music before!  After the eight weeks, that changed too!

Thirty years did change things but not the story! 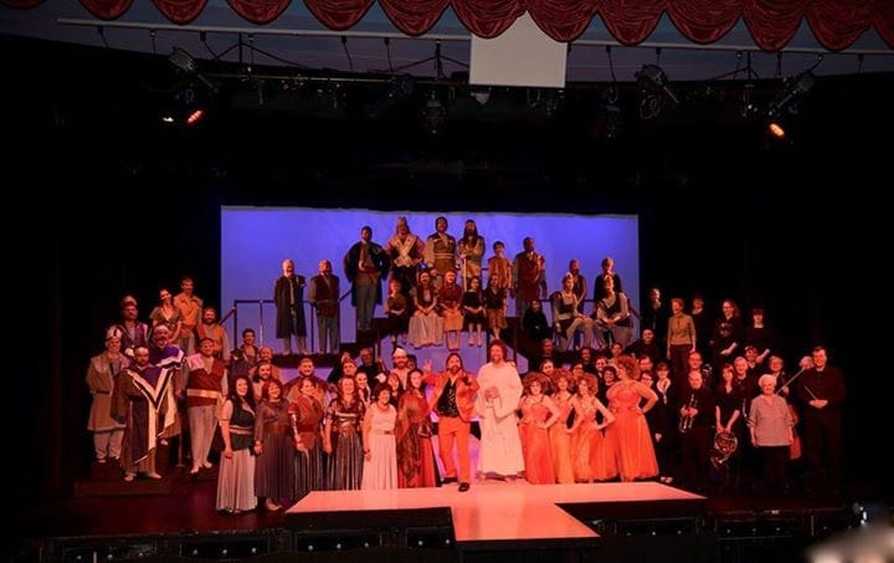