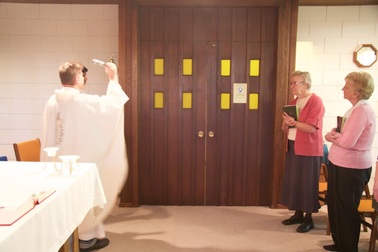 Walking through a Jubilee Door of Mercy during 2016 is a chance to pray for removal of sin and obstacles of personal weakness and temptation. Even just approaching the Door at Martha’s Retreat Centre off Scenic Drive in Lethbridge is at the same time a bit daunting (if you’ve never passed through a Holy Door) and full of anticipation.

Some of those who have entered the retreat centre’s chapel through the door have been unsure of what to expect, but Sister Theresa Parker instantly reassures them they are “entering into the presence of God.”
The first to enter were women of the Assumption Catholic Women’s League, attending their annual retreat in January.
“I asked them to go through the door and see what surprises you.”  Of the 18 who entered, 16 had an example of how they were surprised, she said.

Bishop Henry designated the door at Martha’s Retreat Centre “because we’re here all the time,” said Sister Theresa. It’s the first time the centre has been designated. Although formal hours have been established, when volunteers are available to lead visitors to the door, “They can come any time,” she said with a smile. The formal hours are Mondays from 2 to 5 p.m. and Thursdays from 7 to 9 p.m.

Pope Francis declared 2016 as an extraordinary Jubilee of Mercy last April. Most years of mercy follow a 25-year schedule, but this one,  established through the MisericordaeVultus, emphasizes the “importance of mercy and the need to gaze on it,“ as well as recalling the need for the Church to be more open, “keeping alive the spirit of the Second Vatican Council” 50 years ago.

A card on the door, installed by Fr. Kevin, says: “Jubilee Door of Mercy. Celebrating the Extraordinary Year of Mercy, Dec. 8, 2015 to Nov. 20, 216. Jesus said, I am the Gate. Enter and receive his mercy.”
Sister Theresa explains the difference between seeking forgiveness from God and God’s mercy: seeking forgiveness is the action of the seeker, while granting mercy is God’s response.

As of the Friday before the beginning of Lent, 31 people had passed through the door. Sr. Theresa hopes many more will enter, and pray in the chapel before Nov. 20, when the Jubilee Year ends.

Walking through the door is like “going through a portal and meeting something new, a symbol of opening to newness of life,” she says.