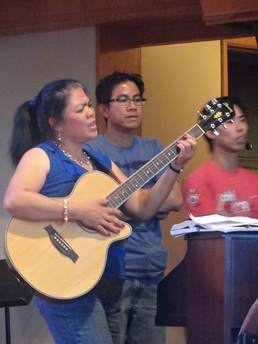 Recently I visited St. Basil’s church to interview Carol Raposas who was rehearsing a choir for an upcoming Mass. I watched her keep time with an up-raised arm, encourage youngsters with jokes, and stop the organist again and again until each piece was polished. The singers ranged in age from elementary school to adults; there was even a baby being swayed to the music. I knew the dedication of the choir was a reflection of Carol’s commitment. As everyone poured their hearts into the offertory song, I realised it was Carol’s philosophy in a nutshell - “Lord I offer my life to you… use it for your glory”.

As a child growing up in the Philippines Carol remembers her parents being heavily involved in the church. She followed their example by enrolling in Couples-For-Christ (CFC), a Vatican-approved movement that seeks to renew the faith of Catholics primarily by working within families. Carol learned to play the guitar and piano by ear and began serving in music ministry. Even today, Carol can be found strumming and singing, for example with half a dozen guitarists during the Corpus Christi procession.

In 2001, Carol came to Lethbridge to work as a caregiver but circumstances dictated a sudden move to Calgary. There she re-connected with CFC and began a mission to bring the group to Lethbridge. “We used to pray over the phone,” Carol says about her CFC friends, “just to have that nourishment.” Ten years ago, Couples-For-Christ officially started in Lethbridge and has grown exponentially since. Carol is still involved as a leader. The group continuously works at developing leaders among young adults and teenagers, both Filipino and others.

The day after I watched Carol conduct the choir, I met her again at a Kids-For-Christ one-day camp, led by a dynamic team from Calgary. Once again, the multi-generational focus was evident. Carol’s grown sons joined a host of young adults in providing music and prayer support. Grandparents, parents, singles and children all prayed for, and with, each other. Carol stressed the success of the group has been a result of many individual contributions. Her vision for CFC in future is “to be a strong arm to support the parish.”

Besides CFC, Carol is familiar to parishioners from her volunteer hours with RCIA, ushering at Mass, hospital visiting, and music ministry. Her effervescent personality endears her to everyone and her organizational skills have made her one of the ‘go-to’ people for church events. Carol laughed when I mentioned this and quickly credited her friends who are ever-willing to have their arms twisted to help her! One friend told me Carol “is ready to help someone at a moment’s notice”; which may be why she has so many friends. Carol’s strong faith and her spirit of service are an inspiration to us all.