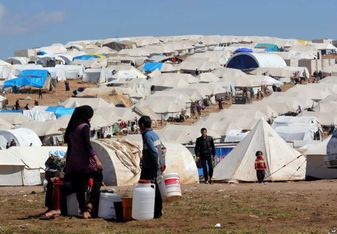 All Saints Parish should be welcoming two Syrian refugee families within six months, says the Calgary Diocese refugee sponsorship co-ordinator.
Antoinette Godbout says she has been overwhelmed with requests from diocese churches and individuals to sponsor refugees who have fled the Syrian conflict.
“We have more people and more churches coming at us (as potential sponsors) than we can handle,” she says.

Lethbridge will receive two Syrian Christian families — five to seven people — whom the parish will agree to support for at least a year. Families typically have two or three children.
Sponsorship will involve finding a place for the families to live and providing items such as winter clothes and furniture. It will also require helping with applications for a social insurance number, immigrant family services, health care, English language training, and registering children in Catholic schools.

It’s also showing families how to handle themselves in their new neighbourhood, helping them practise English and stock the kitchen.
“And just being friends with them throughout the year. Of course, sponsorship means introducing the families to the Parish community, perhaps with a social function like a luncheon,” says Antoinette.

Fr. Kevin says, “It’s exciting because you want to do something” but the word from the Calgary Diocese organizing the effort to bring families to Southern Alberta has been that when they know something, the parishes will be told.

Antoinette says she is planning a trip to Lethbridge early in the New Year to discuss the application process with people in the parish. She will be travelling with Fr. Ephrem – a Syrian Melkite priest who was assigned to the diocese from the Montreal diocese at the request of Bishop Henry. He helped established the Melkite Eastern Catholic Church community in Calgary, where most refugees with family members already established will go.

Those who don’t have family in Calgary “have said they will go anywhere.” Two families each have already been assigned to Medicine Hat and Brooks sponsoring churches.
Calgary will be receiving 1,300 of the 25,000 refugees committed to by the federal government.

They – and the refugees for Lethbridge – will be coming from Lebanon. They’re Christian and had to go to Lebanon because they would have been further persecuted on the road to Jordan and Turkey, where the UN refugee camps are.
“As a minority group, they wouldn’t even have been allowed into the camps,” said Antoinette.
“In Lebanon, they have had to fend for themselves. It’s a hard life.”

Fr. Kevin says the parish is prepared to take more than one family.
So far, about 10 people from the parish have said they are eager to help with the Parish’s refugee effort.
Between $20,000 and $25,000 will need to be raised to support each family for a year.

The October Parish Council minutes also show an interest in bringing a Sudanese family from a refugee camp in Uganda “but this is harder as they are considered to be in a safe place when in a refugee camp and Canada has many quotas in place.”

The Diocese brought 133 people to Canada in the past year.
“We started applying for Syrians in July 2013 and received the first in September 2014. We’ll be getting a whole lot more between now and the end of the year,” says Antoinette.

The Calgary Diocese is “one of the biggest programs in Canada.” It has been a Sponsorship Agreement holder, helping in the settlement of government-sponsored refugees on top of the private sponsorships, since 1979, “the days of the Vietnamese refugees,” she says.
Site Proudly powered by the Holy Spirit