Syrian Refugees, Our Brother’s and Sisters in Christ 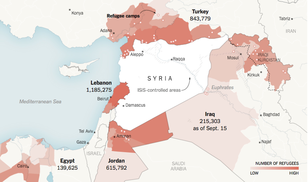 ​I was asked to share a little about the Syrian Refugees attending All Saints Parish and I am glad to share what I know, so that all of us understand a little more about these brothers and sisters in Christ.
I would like you to imagine the following scenario:
It is August of 2014.   Your family consists of:
Father named Tawfik: 55 years old and a successful real estate agent
Mother named Amal: 45 years old and a full time school teacher teaching French
Son Yummin: 19 years old and in his second year of IT Computer Technology
Son Elian: 16 years old and in the tenth grade.
You are the Sarkees Family.
You have a beautiful home, fully paid for. You have a good life with relatives and friends.
Outside the streets are getting more and more dangerous as insurgents, (those fighting against the government) are increasing in numbers. Isis is occupying many of the surrounding cities and they especially target Christians, which is anyone who believes in our God. They kill anyone who will not renounce God. Christians are the most persecuted people in Syria.
So Tawfik and Amal decide it is time to leave. Leaving behind everything they know. Their photo albums, their neighbours, their church family, their friends, their jobs, their home, their vehicles, their language (their first language is Arabic and second language is French. The children also know a little English) and the hardest part: Their families. Their siblings and their parents are not coming with them. They say it is difficult and complicated, but not everyone can leave. Tawfik and Amal notify their parish priest to ask for a blessing and prayers as they go.
So Tawfik, Amal, Yummin and Elian leave Syria with a suitcase each and head for Lebanon. Here they rent a house, and wait to see if the war will end. After one whole year and one month of waiting, their parish priest contacts them and says he has put them on a list to go to Canada. They are overjoyed. It takes another 11 months to process them, with background checks, physical examinations, and paper work until finally they are put on a plane to Canada, with a plane ticket paid for by the Canadian Government, but which must be paid back in full in one year.
They arrived here at the end of February, of this year.

Elham is a widow about 60 years old.
She has four children two sons and their wives and children are here now and in the next eleven months two daughters and their husbands and a total of four children will arrive. They may arrive next week or in 11 months. We don’t know when.
Elhams sons and their wives are known as the Algiberez Family
Faras and Lana have three children: Angie 8 yrs. old, Antoon, 6 and Laurita 3
Faddell and Roolla have one son Ellie who is 4 years old.

The Algiberez family lived together in Syria, possibly out of fear of what was happening outside in the streets. They don’t like to talk about it. Their house was bombed so they fled to the church and lived there in hiding for over a year. Just imagine staying inside for over a year with a two year old, a three year old and a six and seven year old. This family was also put on a list to go to Canada and arrived in Lethbridge, Alberta at the end of February.
These families did not know each other and lived approximately 50 kms apart in Syria. They are now sponsored by the same four churches and they see a lot of each other.
The sponsoring churches are two United Churches and 2 Mennonite Churches. These churches have known the name of these families and they had been planning, praying and waiting for them for over a year.
There are many people helping them but the very first sentence they spoke after they arrived in Lethbridge, through a translator is this:

Thank you for sponsoring us. We are Catholic. Where is your Catholic Church please? And when can we put our children in school? (Remember they have not been allowed to go to school for a very long time).

So that brings us to our relationship with these wonderful, humble, grateful and kind people who attend mass on Saturday evening at 5:00 Assumption Church.
There are thirteen of them soon to be 21 when the next two families arrive.
They sit in the front two rows, because they speak little English and they need to see how we do things here. The children are better behaved when they can see what is going on.
The children enjoy putting money in the collection jar at the front of the church.

So what happens next?
These families have just 10 more months to do the following:
Master the English Language,
Get a job (don’t worry they won’t take a job from you, they will likely work at Sunrise Poultry).
Pay back the flight from Syria to Canada
Learn to drive
Be totally self sufficient earning a living, with enough to pay rent, bills and provide for their family.
Learn how to live in the best country in the world
So where do we go from here?

I wish every single parishioner would walk over and extend their hand in welcome to these wonderful people
I wish some of you would invite them to your homes for supper. They eat everything except pork.
I wish some of you would invite them for Ice Cream after mass. The Dairy Queen is right next door.
I wish the Knights of Columbus and the CWL would each have a dinner in honour of our new family members, and perhaps we could charge a fee and give these families Gift Cards for Groceries at the Superstore.
I wish all of you would phone the church office and offer to drive the Syrians to mass on Saturday evening. Right now I drive one family and the Knights pick up two families in the van. Soon there will be two more families. Summer is approaching and the Knights van will be used for Camp Columbus.
These people need to feel loved by their Catholic family.
They do not expect a free ride, they are ambitious and anxious to be successful. Let’s see what we can do to make a difference in their lives to make things a little easier for our brothers and sisters in Christ.
As Jesus said, “What so ever you do to the least of my brother that you do unto me. When I was a stranger you opened your door. Now enter in to the home of my Father. “