The Miracle of the Eucharist 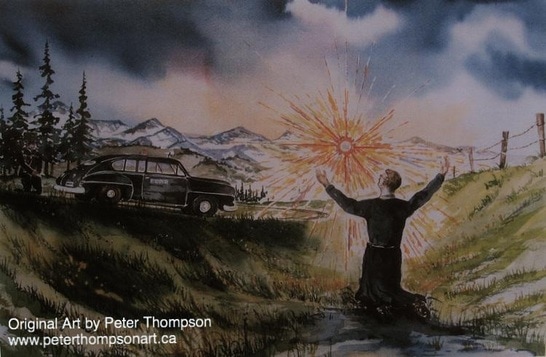 If asked to name one of Jesus’s miracles, most people would point to healings, feedings or walking on water.  Most people wouldn’t say, “Jesus changed bread and wine into His body and blood.”1 Sometimes we can be so close to a miracle that we barely recognize it.

Sunday after Sunday, we have come to expect that Jesus will appear during the Mass. We are confident that our mundane food gifts will undergo a profound change and that what seems logically impossible will happen. Bread and wine will turn into the ‘body and blood, soul and divinity of Jesus Christ’ (CCC 1374)2 with almost numbing regularity. We dutifully bow our heads at the sound of the bells but do we recognize we are suddenly in the presence of the King of Kings? We queue up for a handout, but do we remember our Messiah’s earnest entreaty, “unless you eat my flesh and drink my blood, you will not have life within you” (John 6:53)?

If our acceptance of the Real Presence of Jesus in the Eucharist is half-hearted, it might be because the concept of flesh and blood is a little too real, even somewhat gruesome. So we prefer to think in more benign ways about Jesus’s sacrifice, ignoring the fact that Jesus’s crucifixion was both real and gruesome. This reality becomes inescapable when we are confronted with Eucharistic miracles.

Technically, a Eucharistic miracle is any miracle involving the Eucharist. However, Eucharistic miracles typically consist of unexplainable phenomena such as consecrated hosts visibly transforming into flesh or bleeding, or being preserved for extremely long stretches of time, surviving being thrown into fire, or even sustaining people for decades. Wikipedia advises that a special Catholic task-force or commission investigates supposed Eucharistic miracles before deciding whether they are "worthy of belief." As with other miracles, such as Marian apparitions, belief in approved miracles is not mandated by the Catholic Church. But they do serve to reassure believers of God's presence and communicate an essential truth about the Eucharist to the population at large.

The Miracles at Lanciano and Buenos Aires
There have been thousands of Eucharistic miracles since the first one was recorded in Italy around 700 AD. They continue to happen around the world at such a pace that the Church can only verify a handful of them. Arguably, the most famous Eucharistic miracle happened at Lanciano, Italy in the 8th century when a monk celebrating Mass noticed the bread turn into a piece of flesh and the wine into globules of blood. These relics are still on view in Lanciano and draw millions of pilgrims every year.

More recently, in Buenos Aires, Argentina in 1996 a discarded host was placed in water to dissolve, a common practice for disposing of spoiled consecrated hosts. After a few days, it was noticed to have changed into a fleshy substance.  Subsequent tests showed it to be a piece of heart muscle. Interestingly, this miracle happened under the purview of Cardinal Jorge Bergoglio, better known nowadays as Pope Francis. More information on these and other miracles is available from:  http://www.therealpresence.org

The miracle at Cowley, Alberta
A less known Eucharistic miracle, albeit not a recognized one, happened in the Crowsnest Pass in 1946. Local lore has it that the church in Cowley was vandalized and several consecrated hosts were removed from the tabernacle and scattered in the nave. The local priest at the time, Fr. Gino Violini, was able to retrieve all but the large Benediction host. In a panic he mobilized his small faith community to look for it. Through a process of good luck and clever detective work, the RCMP was able to quickly locate the perpetrators who admitted to tossing the host out their vehicle window along a particular stretch of old Hwy 2, somewhere near Bellevue. In desperation, Fr. Violini asked to be driven slowly along that road in a police cruiser. Suddenly the priest spotted the host floating in the air above a roadside ditch.

This miracle was apparently witnessed by an RCMP sergeant named Parsons. It is more fully recorded on the website www.michaeljournal.org and elsewhere.  While the break in is recorded in diocesan logs, the miracle is not. Understandably,  the Church needs to have incontrovertible proof of such miracles. However, Fr. Violini’s personal testimony, coupled with his reputation for holiness and humility, were sufficient to garner many believers. A YouTube video made on the 50th anniversary of his ordination touches on the story (fast forward to minute 14:30).  “Fr. Violini”:  https://www.youtube.com/channel/UC0sSImZ7hyquW27YBRdda-g

Eucharistic Adoration
Since the Eucharist is "the source and summit of the Christian life" (CCC 1324)3 the least we can do this Lent is to try to receive it every week. Keeping in mind that Jesus is actually present in every consecrated host.  Consider visiting Jesus during Eucharistic Adoration too. This face-to-face meeting can add a new dimension to one’s spiritual life.

There are many ways to ‘do’ Adoration - see “48 things to do at Adoration” from the website http://maronitemonks.org/articles/February2006.pdf .

No way is wrong if it brings you closer to God. Even children will benefit from early introduction to this beautiful devotion.4  Start with just a few minutes if an hour seems intimidating and just sit in silence. Try to visualize Jesus physically on the altar looking out at you. This may take some getting used to and you may be tempted to babble prayers or read scripture instead.  Although these are acceptable ways to spend time at Adoration, the first purpose is to bask in the presence of God. So go ahead and drink Him in. What the Eucharist is to your body, Eucharistic Adoration is to your spirit – a vital infusion of life and strength, a healing remedy for whatever troubles you.

The Eucharist is an everyday miracle that we as Catholics are blessed to have. May we never fail to cherish it.