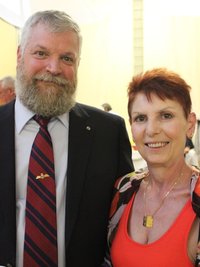 What I notice first about Cyndi Lilienthal are her Creamsicle orange shoes. It turns out Cyndi has a fondness for footwear as I discover from the “Shoes through the Ages” calendar by her desk and the ‘bling-y’ miniature stiletto on her keychain. A quick scan of her office reveals another of her passions, quilting. Intricately sewn panels are folded over two chairs to create an inviting nook for conversation. “I do it (quilting) to keep my sanity,” Cyndi reveals, eagerly describing her new long-arm machine and the many projects she has already completed with it.

As we sit to begin the interview Cyndi apologizes for coughing saying she was just diagnosed with pneumonia but dare not take a day off because Confirmation preparation is in full swing. She waves off my concern quipping “It’d kill a lesser woman!” Then she grins and changes the subject. Everything about Cyndi’s trim frame and quick movements suggest efficiency which is fortunate since sacramental preparation was well underway when she assumed the position of coordinator in March 2017. Cyndi is grateful for the handover she received from previous incumbent Gary Hudak but says that the system in Lethbridge is significantly different from her past experience in the United States.

Prior to moving to Lethbridge, Cyndi worked at Peterson Airforce Base in Colorado. She explains that her husband Peter, who is now retired, was a C130 Hercules navigator with the Canadian Airforce. In later years Peter accepted administrative positions which led to his posting to the NORAD base in Peterson. Before that, the family had lived for various periods in Ottawa, Trenton and North Carolina. While they lived in Ontario, Cyndi originally used her Environmental Science degree to work in the road construction industry testing building materials. She enjoyed the work but had to be on site far from home for days at a time. When daughter Elaura (now 22) came along, Cyndi resigned herself to working wherever the Military Family Resource Centre could find her a nearby placement.

In Colorado Cyndi served as Religious Education Coordinator at Our Lady, Queen of Peace (the Peterson AFB Catholic Community). She counts that job as one of the best she’s had because of the close connections formed with other Catholic families. The position also required a high degree of resourcefulness. Cyndi once arranged for a father to FaceTime into his son’s baptism following his unexpected deployment overseas.

Although she misses her Colorado friends, Cyndi points out many advantages to living in Lethbridge. “The drivers are polite and it’s easy to get across town. There’s oxygen here too,” she laughs, explaining that the altitude of Peterson, Colorado made it difficult to breathe sometimes. Another bonus is being closer to her brother in Calgary and siblings in Ottawa. Plus “decent chocolate, PC choice products, Tim Hortons, Swiss Chalet and good cheese curd.” Cyndi and Peter are looking forward to introducing Elaura to the Calgary Stampede this summer and hopefully making a few trips to Waterton. Cyndi also plans to explore Lethbridge’s running trails although she has had to cut back on her marathon running since re-injuring her knee a few years back.

What have not been as enjoyable in Lethbridge are the wind and our reputation for Last-Minute responses. Cyndi sighs as she remembers how many overdue forms have yet to be delivered from sacramental candidates. For a second she looks weary but the next moment she brightens. Her iWatch alerts her to another engagement so she bids me good day and is quickly on to the next item in her “crazy busy” agenda.
​
I slip away feeling grateful that the Holy Spirit has brought us yet another capable and caring staff member.
Site Proudly powered by the Holy Spirit