​Welcome to our new Syrian Family 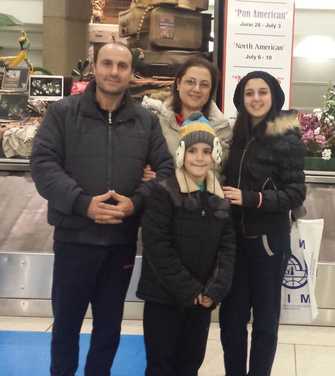 The Syrian Family sponsored by All Saints Parish arrived on November 28, 2016.
​
Before providing details about our family who have escaped the horrors of war, let us be mindful of the seriousness and effects of the war in Syria, especially for Christians.  The Chaldean bishop of Aleppo, Antoine Audo, reported to the United Nations headquarters in Geneva in March, 2016 that “in only five years of conflict and persecution, the Christian population in Syria has been reduced by two thirds, from 1.5 million to only 500,000 today.  Our brothers and sisters in Christ have been ravaged by the fighting, and persecuted by Islamic extremists.”  His holiness, Pope Francis, issued a joint declaration in February, 2015 that “whole families, villages and cities of our brothers and sisters in Christ are being completely exterminated.”  The declaration went on to say:  “We bow before the martyrdom of those who, at the cost of their own lives, have given witness to the truth of the Gospel, preferring death to the denial of Christ. “
​
We are pleased to welcome and provide sanctuary to the Rezk family consisting of four members:  Antoune (Tony), Lilian and their two children, Goliana, age 16 years and George, age 9 years.  They lived in a Christian suburb in Damascus before losing their auto mechanic business, their vehicle, their home and all of their possessions in bombings. They fled to Lebanon, leaving behind their family and friends to the only available safe haven from the continued persecutions, bombings, and war.  There they waited to be accepted by a country that would grant asylum to them as refugees. They had to use what little money they had to support themselves during that time plus save enough to pay for their own airfare to come to Canada. Christians are unable to stay in the Refugee Camps because of fear of continued persecutions and possible death.  When asked how they survived, Lilian said:  “We had to be strong for the sake of our children.”

They are now residing on the north side in a modest home rented by the parish and furnished with donations from your generous hearts.   They arrived with 2 suitcases each containing the few personal belongings with which they had escaped.  As sponsors, the Parish must pay for their rent, utilities, food and subsistence for one year as well as assist them in adjusting to Canadian life and finding them employment by the end of the sponsorship year.
Prior to losing everything, Tony was a car mechanic, owning his own business; Lilian was a homemaker.  Lilian had studied two years in an English Institute in a teacher education program to become a teacher prior to her marriage to Tony.  While in Lebanon, Lilian home-schooled the children as they could not attend schools there.  She took Goliana back to Syria to write her Grade 9 examinations to demonstrate that she had met the Syrian requirements for successful completion of that grade level.  Goliana speaks and writes English.  Tony and George do not speak nor understand English yet.
Goliana is enrolled in Grade 10 at Catholic Central High School and George is enrolled in Grade 4 at St. Mary’s Elementary School.  Starting in January, the parents will be attending English as a Second Language classes offered through Lethbridge Immigrant Services.

This family continually expresses their gratitude for not only the sanctuary Canada has provided but also for the love and support they have felt since arriving in Lethbridge.  Every time they encounter a member of the Sponsorship Committee which is working on behalf of the Parish, they say “Thank you, Thank you for all that you do.  What can I/we do to give back to the Parish?”
Many parishioners have asked how they can help.  There are many things you can do, ranging from financial contributions to the Parish specifying that your donation be directed to the Syrian Refugee Sponsorship, to greeting and welcoming them to Mass as well as into your homes.  The family is new to Canada and they have left behind all of their family, friends and familiar customs.  They can become easily isolated and lonely if we do not make them a part of our Catholic community.

To prepare our hearts, the Syrian Refugee Sponsorship Committee asks for your prayers:
Blessed are you, Lord Jesus Christ.

You work in the hearts of all to bring harmony and good will.

Strengthen us to welcome those from other lands, cultures, and religions that we may live in human solidarity and in hope.

God of all people, grant us vision to see your presence in our midst, especially in our immigrant sisters and brothers.

Give us courage to open the door to our neighbor and give us the grace to build a society of justice.